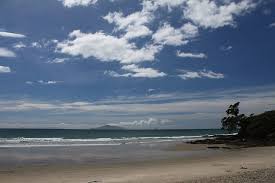 On the morning of the 11th June 2006 as I was walking along the beach and praying for the church and Waipu I perceived the Holy Spirit say to me. Len you encourage Rev Peter Dunn and deliver this word to him. Peter even though there are those who are sceptical right now about My Spirit moving in New Zealand, you need to encourage the saints that many, many years ago seeds of revival were sown into your community by those faithful brothers and sisters in Christ who had gone before you.

Many of the saints have been watering the seeds over the last number of decades by prayer, intercession, preaching the word and declaring the harvest to come over this region of the country and those faith-filled words that have been spoken out into the spiritual realm are going to bring about a harvest.

Isaiah 55:11, “so shall My word be that goes forth from My mouth; It shall not return to Me void, but it shall accomplish what I please, and it shall prosper in the things for which I sent it.” As I looked at the sea that morning it seemed to be unusually flat with hardly a ripple on the surface, the Holy Spirit prompted me to look again with a question, “what do you see?”

I looked and saw bigger waves on the horizon, huge waves coming powered by the Holy Spirit of God. I perceived a mighty move of the Spirit of God. These waves gave me the impression that there were words riding on the waves and their names were salvations, healings, forgiveness, and grace.

There was the power of the Holy Spirit to release, the love of God, and the “agape love” that flows from the throne of God that knows no bounds. This scripture came to me; “Enlarge the place of your tent, and let them stretch out the curtains of your habitations; Do not spare; Lengthen your cords, and strengthen your stakes. For you shall expand to the right and to the left, and your descendents will inherit the nations, and make the desolate cities inhabited.” (Isaiah 54:2-3)

It is now time to call forth the harvest to release the purposes and destiny for your region so that the seeds of revival will be multiplied into the harvest of souls and many will be saved by the transforming power of God’s Holy Spirit that will be released.I have been carrying this burden of expectation for a number of years, that the glory of God is coming to the nation of New Zealand and I have a strong perception that the Holy Spirit has an agenda for your community and church beyond what you might see right now?

The restoration of the church means the release of God’s power without measure through the church. That release will come through His people as the gifts of the Spirit operate without restraint or restriction under the direction of the Holy Spirit and by His love. Jesus said all men would know we are His disciples (John13: 34) and for us to know the time and hour of God’s visitation to the church. Oh what God will do with a hungry church and community? Blessed are those who hunger and thirst for Him, for all men will be drawn to Christ.

Many of the saved and unsaved businessmen and women are going to be touched by the Holy Spirit and your civic leaders will get in behind what God is doing and the healing gifts will flow and many ethnic people will be touched and healed of un-forgiveness and physical sickness. I got a strong impression that there is an open heaven over your church and community that will allow different denominations to come into God’s purposes.
The unloved and downcast will come into the grace and knowledge of Jesus Christ. For many families will experience forgiveness and where they have had offences from the past caused by property and business disputes and also community injustices, there will be forgiveness and reconciliation with one another that will bring about a grace and love for one another which has not been experienced before. You are a leader that has great faith, many other ministries will come to you for Godly counsel, and your leadership will bring unity in and out of the church and release a powerful influence of Holy Spirit anointing.

For it is written, ”eye has not seen, nor ear heard, nor have entered into the heart of man the things, which God has prepared for those who love Him.” (1Corinthians 2:9) I see there is going to be an amazing love released by the Holy Spirit into lives that are yielded to God in this season we are living in. There is a time of outpouring to come, encourage your people to pray and this scripture comes to me; “praying always with all prayer and supplication in the spirit, being watchful to this end with all perseverance and supplication for all the saints”. (Ephesians 6:18) And there will be a call for us to have hearts that are repentant and the scripture in 2 Peter 3:9 says “The Lord is not slack concerning His promise, as some count slackness, but is longsuffering towards us, not willing that any should perish but that all should come to repentance”.

I’ve been praying much about this prophetic word and I want to be obedient to the Lord and I humbly submit this word knowing that we are only vessels used by God for His purposes.

From: Peter Dunn
Sent: Wednesday, 18 October 2006 14:50
To: Len & Linda Buttner
Subject: Re: Prophetic Word for Waipu
Hello Len,
First of all thank you so much for the prophecy you sent. It’s a long story how it fits in but here is a abbreviated version. Back in about 1992 we were visited by one of the great prayer warriors in our denomination, a lady called Catherine Hollister-Jones. She attends St Peter’s Presbyterian, Tauranga. She, like you, was walking along the beach and received a vision which she brought to our church one Sunday morning. This was at a time when our parish was very down cast and toxic. In her vision the sea was flat, but she could hear a thundering noise to the east. As she looked out to Hen & Chick islands and Sail Rock she was struck by a very strong wind roaring in. Then she saw a wave break over the islands, then another and another, a whole series of them. They came to the beach and washed right over to the other coast. Instead of destroying anything the waves washed the countryside clean. She said the Holy Spirit was coming with great power to this area and to our church and an awakening would begin that would spread and spread. Those who were there often recall the vision and we have held it close to our hearts and haven’t really shared it.
A long time has past and our church has been moving forward slowly with many trials. Lot’s of really good things have been happening though. When you guys came up in June the gift of prophecy really took hold and we have definitely entered a new phase of our development. The prophetic words given over the weekend ignited a whole group within our church who have subsequently branched out in their callings. A few have received the gift of prophecy. These people are both old and young. There is one lady who is regularly having dreams and receiving messages of encouragement for people in our church from the Holy Spirit. She rights them down and goes and visits them, sometimes before breakfast.
Another lady, in her 70’s, has had a series of visions. She called in today to tell me about her last two. A man has been so impacted by the word he received that he has this huge vision and desires to see great things done for the Lord in our community. He is also level headed. There are many others too.
Meanwhile since your visit the leaders and the parish have been under sustained spiritual attack (I’m not blaming you). I have had direct potentially soul destroying attacks on my ministry, the elders for a couple of months had a division thrust deep into our relationships, one of our three congregations has gone toxic. The way it started out I thought it was just the winter blues, however the spirit of condemnation was so rampant it soon became apparent we were facing up to something much more sinister. Calls to prayer went unheeded, people were too busy to meet, all sorts of stuff.
Then on September 25 I received two phone calls. At 7.30am from Rev Graeme Turnbill of Fielding Presbyterian Church following a prayer vigil by members of his parish. The following is a transcript from my report to the elders that night.

He told me that a lady who didn’t even know I existed had a prophecy to pray for Peter Dunn at Waipu – to pray for protection and strength as I am under attack and in danger. He told me he was phoning out of obedience to the Holy Spirit to warn and encourage me. He asked me to pass on his parishes love and support for our parish. R

eceived a phone call from Catherine Hollister-Jones from St Peter’s Presbyterian Church, Tauranga, at 9am. I was so surprised to hear her voice as I genuinely thought she was dead. She must be in her 80’s now. The following is a transcript from my report to the elders that night.

She told me she leads a national network of intercessors who pray for PCANZ and they have gathered to pray for General Assembly. Yesterday and last night they prayed for every parish in PCANZ. When they got to Waipu they spent an extra time praying for us. They discerned that I was coming under heavy attack and they prayed for my protection and strength. She said we need to be vigilant, stand and fight spiritually, do not countenance sin, always asking for Christ’s love and wisdom, or we will be defeated at this crossroads. The first and last thing she said was that she was phoning in obedience to the Holy Spirit and for our encouragement.

These messages really brought the elders together and reconciled. We shared them with the congregations, called a week of prayer and fasting for last week which was well supported, finishing with a spiritual warfare service last Sunday night. My elders agreed that we share your prophecy and all agreed God was speaking to us words of encouragement quite specifically.

Today the lady in her 70’s mentioned earlier came to see me. She shared how the week after we told the congregations about the phone calls she was driving into Waipu and she saw a huge black cloud over our little town – although it wasn’t there. She didn’t understand what it meant. She was coming to a prayer gathering as we were praying everyday for our Presbyterian General Assembly. During the prayer time she saw Jesus standing in our church all covered with blood, although he wasn’t on the cross.

She didn’t understand what she saw and assumed it had to do with our national Assembly and what was going on there and didn’t tell anyone. However, during our spiritual warfare service on Sunday night she realised he was bleeding for our parish. Her interpretation is that Jesus is bleeding because of and for us and there is a huge battle raging and he is standing for us. Something big is going down here and it is really exciting.
So that’s the long story short.
Regards and blessings to you.
Peter Dunn
Waipu Presy.

Our Cities are Doors For Harvest

We Are To Seek The Face of God